I'm horrible at taking photos at events, but here are the six I got. I think we can safely say a great time was had by all! 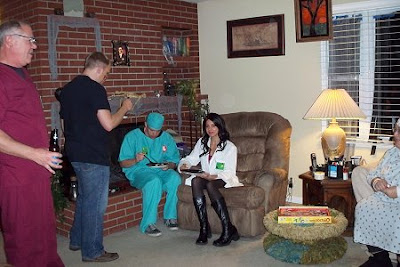 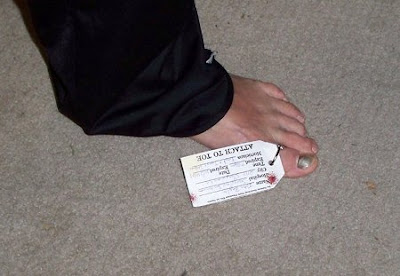 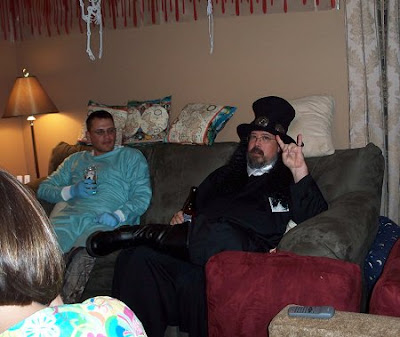 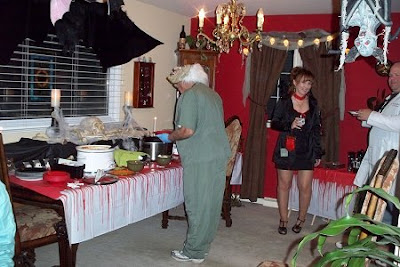 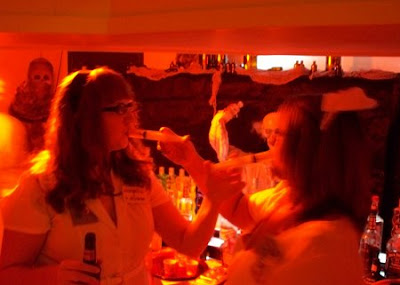 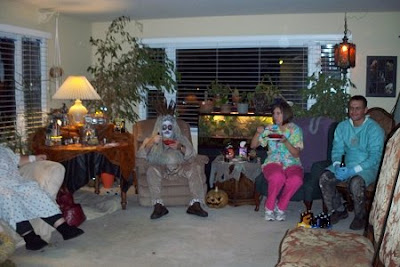 My main mission today was to finish painting the graveyard fence black - mission accomplished! Of course I forgot to get a picture, but there will be plenty once we get the tombstones out tomorrow. After letting my hands recover for a bit (I don't love spray paint!), I headed downstairs and set up the autopsy room: 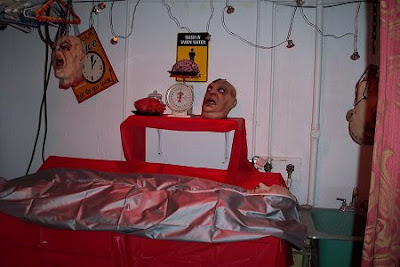 Cool in regular lighting, but way spookier with the red bulb in! 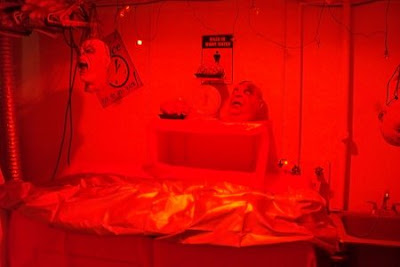 I spent the rest of my time today cleaning, putting totes away and working on the main activity for the party. We're very close to being done with all the scene setting - here are some shots of the pediatrics ward: 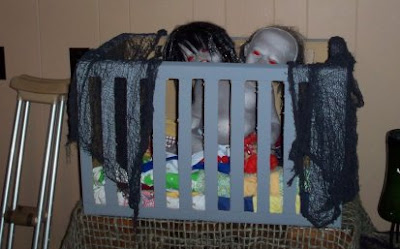 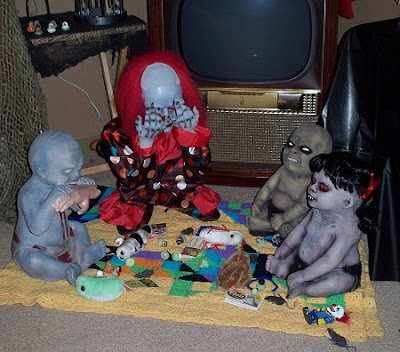 What's that they're playing with? 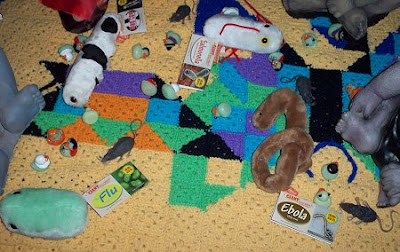 We also brainstormed the party ideas our guests will vote on for the 2010 party. The themes are:

Which one would you vote for?

A lot of cleaning today - putting away unused decorations, getting the glassware rinsed and put out, finishing up the last loads of laundry so I can turn that area into "Autopsy". Not too much to show though...just a quick pic of what I was working on late this afternoon: 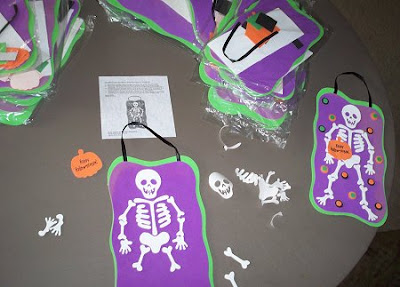 Sorry, I can't tell you exactly what these are for. Don't want to spoil it for the party guests. I'll let you in on it after the party. Should be pretty fun, I think.

Tomorrow, the weather is supposed to be decent, and I'm headed outside to finish painting the fence, and set up the graveyard in the front yard. Hopefully it won't be too cold. I'd also like to finish up the stuff in the photo above, and maybe get the gift bags done. We'll see how far the day goes.

Today was half taken up with errands this morning, one of which was gathering up and donating Halloween stuff we don't need/want anymore to the local rescue mission store. Most of what I did this afternoon involved cleaning, vacuuming and putting stuff away.

So I thought I'd share some pics of things already mostly done: 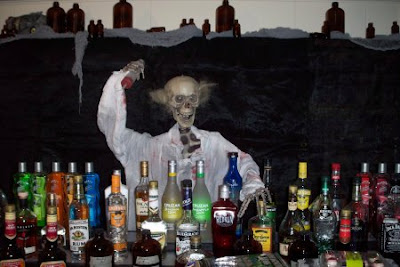 Our bartender this year - the creepy lab technician. 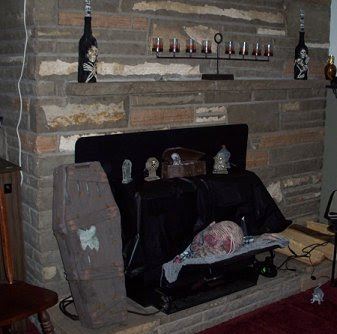 Brent's crematorium - looks creepy this way, but with the lights and fog...primo! 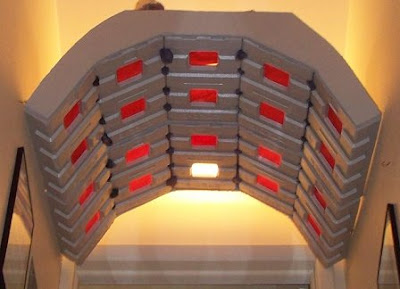 Our MRI machine - another of Brent's brainstorms. This one will have special lighting/sound too. 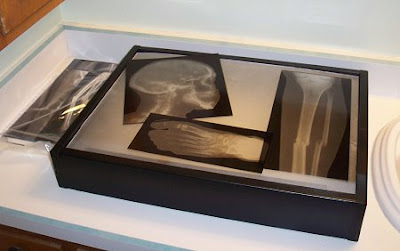 This afternoon I put the x-ray box up...looks pretty good here, even without the lights on! 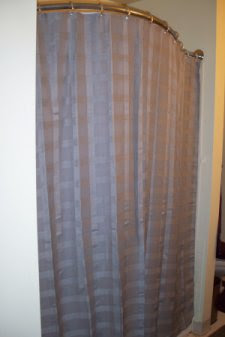 Why am I showing you a gray shower curtain? Hint: our normal curtain isn't gray. Doesn't it make you wonder - what's on the other side?

I'm running half a day behind...tomorrow morning, I'll be finishing up the basement as much as possible. Tomorrow afternoon, time to assemble party bags and start prepping the contests. More photos tomorrow...
1 comment:

It's party week at Chez DeBree, and time to get serious with finishing up the decorations and other preparations. Today was the day to finish up all major decorating on the main floor, and while I didn't get everything I wanted to done, I got quite a bit done. A couple of scenes have to wait until Saturday to put up, and I scrapped one other decor project (no, I'm not telling what) due to time constraints. Here's some of what I did today: 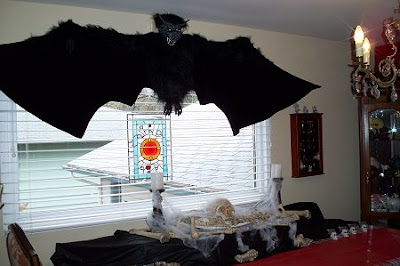 I set up the corpse buffet under our new giant bat. I love that guy! His eyes flash red...scary! 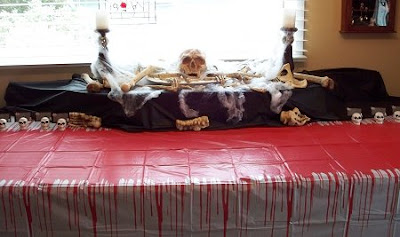 The skeletal centerpiece, ready to serve. 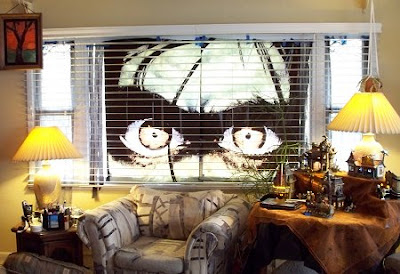 The windows have eyes! Or one window, anyway. 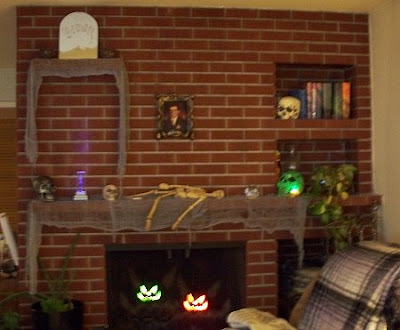 And some creepy faces around (and in!) the fireplace. 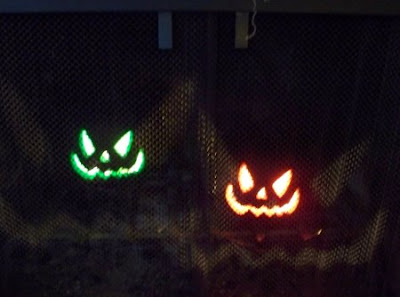 Everyone should have received their invitation by now, so here's what they ended up looking like. Turned out very well, I think, but I forgot to add that costumes, as always *are* required. Oh well...we'll have plenty of costumes for anyone who "forgets". 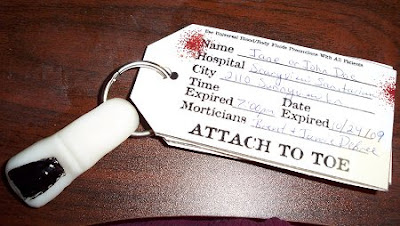 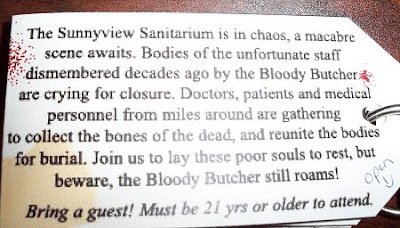 We're at crunch time now - and thank goodness we have a three-day weekend to get some things done. Here's what we worked on today: 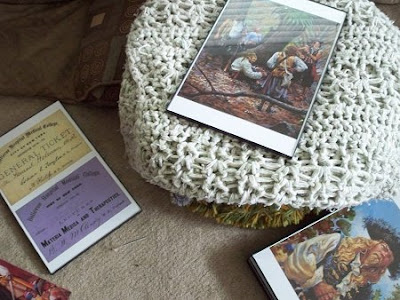 Brent downloaded some old medical certificates and documents that we replaced the pirate pictures from last year with. 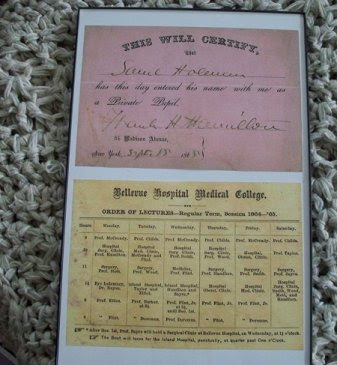 Then I got the Dept. 56 village set up in the living room: 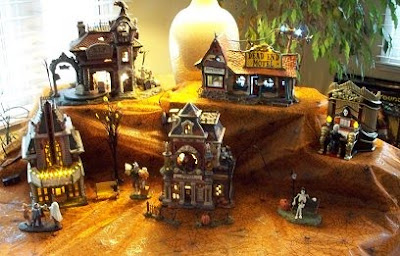 Next, a bloody border and some dangling skeletons:

And finally the Lemax village in the basement: 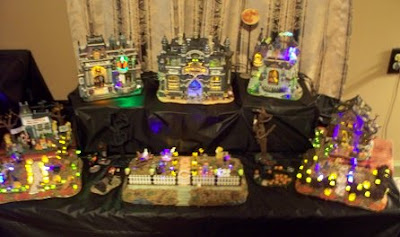 Doesn't sound like much, but we did some cleaning & reorganizing as well. Tomorrow, I think we'll be able to get pediatrics/therapy/surgery mostly done, and some work done on a few more rooms as well.

Still haven't found my Halloween clock though. *sigh* I hope it turns up soon!
4 comments: 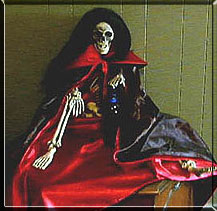